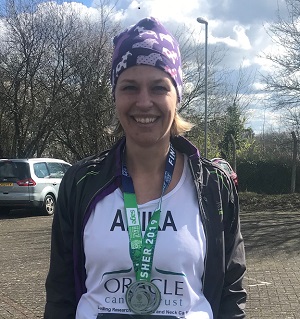 Anika raises over £6,000 in memory of her brother

“My brother Christian died last October, days after his 41st birthday. Having first had tongue cancer when he was 26, much of his life was affected by the disease which was cruel enough to re-emerge last year as throat cancer. Life is not the same without Chris and we all think of him daily. Raising money in Chris’ memory won’t bring him back, but it will help in so many ways to raise awareness and research for head and neck cancer.

“Chris was under the care of the team at The Blenheim Head and Neck Unit in Oxford and we are so grateful for the amazing care he received during his treatment. As a way of raising money I decided to take on the Reading Half-Marathon. I had originally planned to run the event in 2018 but it was snowed off and even though I battled wind and driving rain during the lead up to this year’s event I wasdetermined to finish the run.

“My initial fundraising target was set at £600 and I was overwhelmed by the support of friends and family near and far who so generously supported me to end up raising well over £6,000.

“Chris was loved by so many people and his loss will always be felt by us all. As a family we have struggled to come to terms with losing him, particularly at such a young age and hope that my fundraising has helped in a small way to further research.”

This site uses Akismet to reduce spam. Learn how your comment data is processed.