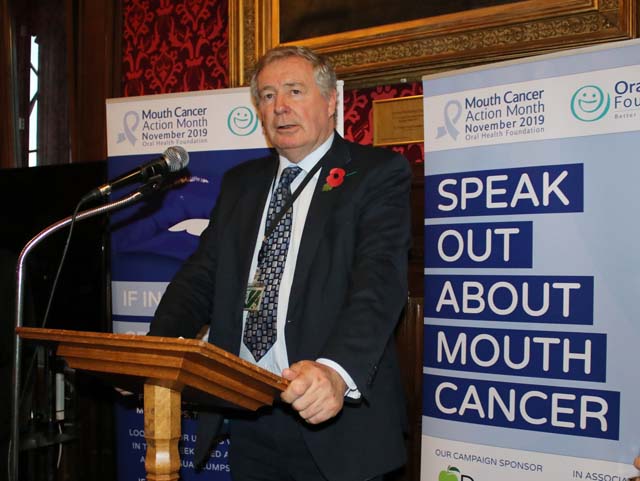 The event at The House of Commons hosted a number of key head and neck support charities, commercial partners, dentists, health professionals and patients who bravely shared their stories including marathon runner Karen Liesching-Schroder who was recently treated for tongue cancer.  Karen's story was sadly too common; an ulcer on the tongue not taken seriously by health professionals resulting in serious delays to her treatment.  With oral cancers early diagnosis is key to minimise damage.

The number of people losing their life to mouth cancer is increasing. Latest figures show that within 12 months, more than 2,300 people in the United Kingdom, 23,000 in Europe and 145,000 worldwide, have passed away because of mouth cancer.

Those been diagnosed has increased by more than a third in the last decade and this is predicted to rise further over the coming years to come.

Mouth cancer is a devastating disease. Those diagnosed can often suffer from problems with breathing, swallowing, drinking and eating. Speech may also be affected, and occasionally even lost. Facial disfigurement can also occur.

This can lead to other problems such as nutritional deficiency, and depression. Difficulties in communication, low self-esteem, social isolation and the impact on relationships can cause as much distress as the cancer itself.

Despite this, awareness of this deadly disease remains dangerously low.

The mouth cancer appeal is designed to help reduce these numbers by making more people aware of the causes, signs and symptoms of mouth cancer so cases can be both prevented and caught early of enough for effective intervention.