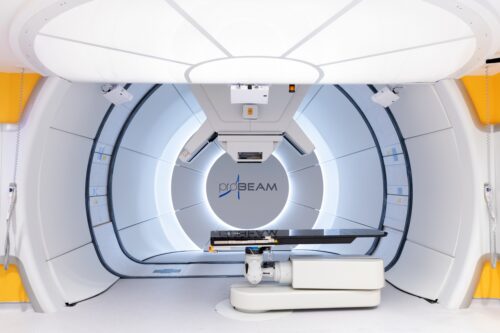 The £350 million facility, operated by University College London Hospitals (UCLH) NHS Foundation Trust, will treat 650 people a year, many of them children and teenagers with rare cancer.

However proton beam therapy delivers a more accurate beam of radiation that can be programmed to stop at the tumour site with no exit dose. This limits the impact on the surrounding healthy tissue, leading to fewer side effects and reduced long term consequences.

Patients treated with proton beam therapy range from very young children to adults who have hard to treat cancers. These may be tumours in the brain, on the spine, or near the reproductive organs, where it is particularly important to protect the surrounding tissue. Around a third of the patients will be children and teenagers.

The UCLH proton beam therapy centre is only the second of its kind in the UK after the first centre opened in Manchester in 2018.

The new central London centre near Euston means that there is now national coverage for the cutting-edge cancer treatment.

Previously patients had to go abroad for treatment to centres in Switzerland, the US and Germany. Ultimately the national proton beam therapy service operating out of UCLH and The Christie in Manchester will treat up to 1,300 patients across England.

The incredible equipment needed to deliver this precise treatment is in the basement of UCLH Grafton Way building.

The cyclotron weighs 90 tonnes and is the size of a family car. It generates the protons spinning ionised hydrogen at two-thirds the speed of light. This beam is guided via massive magnets to one of the four treatment rooms, where a three-storey machine delivers the treatment to the patient with millimetre accuracy.

Oracle's Honorary Trustee Prof Chris Nutting is involved with research for head and neck cancers and the use of Proton Beam Therapy. Says Chris, "The technology will also be used for research and I am will be closely involved in this as Chair of the National Cancer Research Institute’s (NCRI) Proton Beam Research Group. Funding for three phase III clinical trials comparing proton beam versus photon radiotherapy have been secured, one of them looking at the impact of proton beam therapy on oropharyngeal cancer.

Having two NHS proton beam therapy centres in England is very exciting and will deliver significant benefits for patients with hard-to-treat cancers."

Posted in News
← Job vacancyNew PCR Test for Oral Cancer to help early detection →
Our website uses cookies to analyse traffic and personalise advertising. To find out how we use this information please read our Privacy PolicyCookie settingsACCEPT Reject
Manage your Cookies