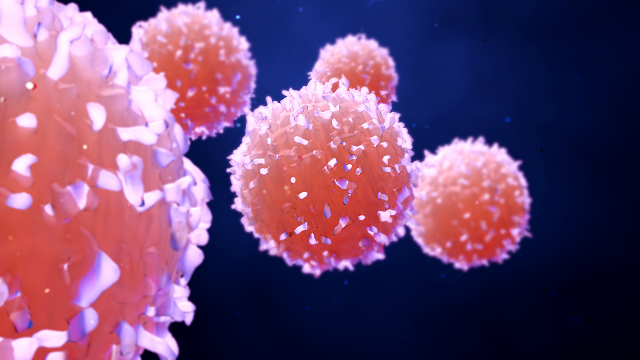 Studies from the Institute of Cancer Research at The Royal Marsden Hospital NHS Foundation Trust showed that patients with head and neck cancer benefited from different treatments depending on the results of a test measuring levels of the protein PD-L1 in tumours and on surrounding cells.

The researchers hope use of the test will be adopted in guidelines as a way to personalise patients’ treatment by selecting immunotherapy, chemotherapy or the combination of the two depending on PD-L1 levels.

Immunotherapy has transformed treatment of head and neck cancer and several other cancer types – but there are still major difficulties in predicting who will respond best and so personalising treatment effectively.

A team at The Institute of Cancer Research, London, and The Royal Marsden NHS Foundation Trust analysed new data from the major KEYNOTE-048 trial to assess whether they should be treated with a combination of the immunotherapy pembrolizumab and chemotherapy.

The research, published in the Journal of Clinical Oncology, was funded by the drug’s manufacturer, Merck & Co., Inc., known as MSD outside the US and Canada.

Out of the 882 people involved in the trial, 373 had a moderate PD-L1 score between 1 and 19. Among people in this group, pembrolizumab on its own or with chemotherapy was able to stop tumour growth in many patients.

However, it was the pembrolizumab-chemotherapy combination that led to a longer overall survival – 12.7 months, compared with 9.9 months for the comparator of cetuximab plus chemotherapy.

The latest results, together with previous findings from the trial, suggest that three different approaches to treatment should be considered, depending on PD-L1 levels. Patients with low levels of PD-L1 are highly unlikely to benefit from pembrolizumab alone, and should receive chemotherapy alone or chemotherapy plus cetuximab.

Previous KEYNOTE-048 analysis showed it was possible to predict who is more likely to benefit from pembrolizumab by testing for PD-L1.

But the new findings suggest patients with moderate levels of PD-L1 may have better outcomes if they also receive chemotherapy. Overall, they support use of the PD-L1 test, which is cheap and reliable, to target pembrolizumab’s use more precisely than before in relapsed head and neck cancer.

Researchers cautioned that some of the results should be interpreted carefully, given the small number of participants with a PD-L1 score of less than 1, and that additional biomarkers are needed to further select patients who could benefit from pembrolizumab.

A clearer indication of who is most likely to benefit

“We have found that patients with head and neck cancer benefit from different approaches to treatment depending on the levels of a key immune protein in the tumour and among the surrounding cells. This new, more refined interpretation of the PD-L1 test should give clinicians a much clearer indication of which patients are most likely to benefit from immunotherapy alone and who should be considered for immunotherapy in combination with chemotherapy.

“Our new findings suggest people with a moderate PD-L1 score would benefit more from a combination of pembrolizumab plus chemotherapy. Currently, NICE has only recommended pembrolizumab on its own for this group of people, so I hope our new evidence will be taken into account and potentially change care for people in England and Wales.”

'A key aspect of precision medicine'

“Smarter tests to identify patients who are most likely to respond to treatment are a key aspect of precision medicine and are urgently needed for immunotherapies. Tests like these can help improve outcomes for patients and make sure we don’t subject people who are unlikely to respond to treatments that won’t benefit them. I hope our new study can improve care for patients with head and neck cancer by helping to optimise treatment depending on test results.”

Mr Richard John, a head and neck cancer patient at The Royal Marsden with high levels of PD-L1, said:

"My PD-L1 test was over 20, which meant I was treated with pembrolizumab, a form of immunotherapy, on its own. I am now in complete remission and so grateful to have benefitted from this study at The Royal Marsden and the ICR. It is such a relief that I didn't have to undergo any additional treatments, such as chemotherapy, which wouldn't have done any more for me than having immunotherapy on its own. The understanding about what treatments are best suited to each individual is transformative for patients like me, meaning we do not have to spend any more time in hospital or dealing with side effects of treatment than is necessary."

Posted in Research
← New PCR Test for Oral Cancer to help early detectionNew head and neck cancer coalition →
Our website uses cookies to analyse traffic and personalise advertising. To find out how we use this information please read our Privacy PolicyCookie settingsACCEPT Reject
Manage your Cookies