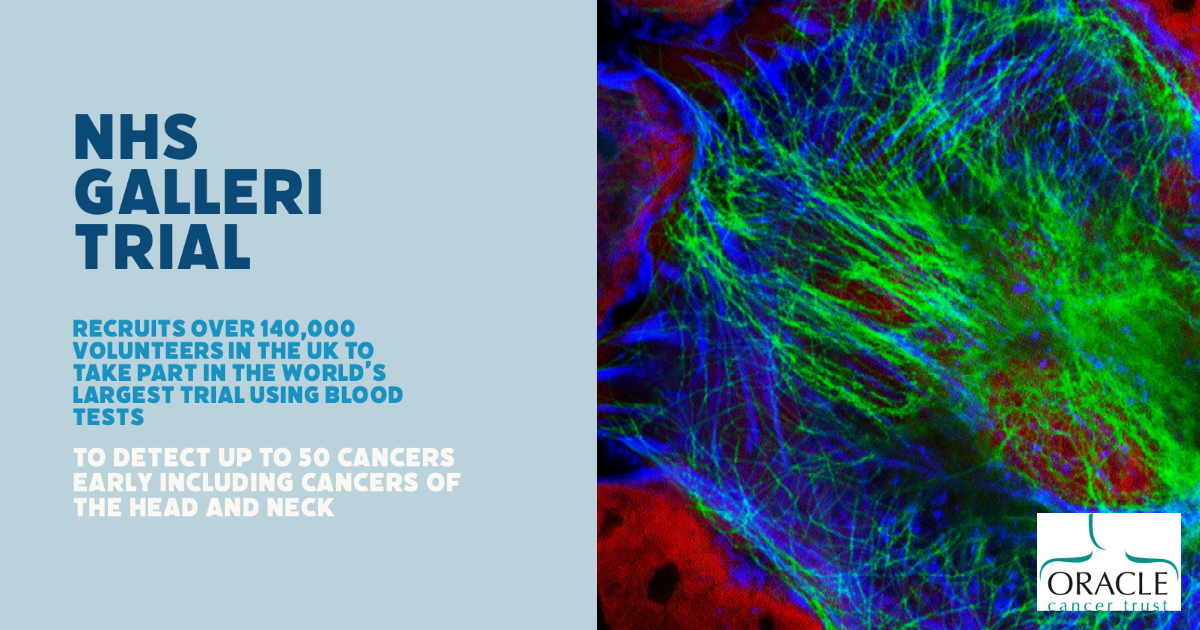 In just one year over 140,000 people have flocked to take part in the world’s largest trial of a blood test that can detect more than 50 types of cancer, as part of the latest NHS drive to catch the disease when it is generally easiest to treat.

Crucially, the blood test potentially offers earlier detection of hard to spot cancers, even before symptoms appear including cancers of the Head and Neck.
Previous research has shown that the test is particularly strong at detecting deadly cancers and is hoped that it will help the NHS to reduce the number of cancers detected at a late stage. The test works by finding chemical changes in fragments of DNA that shed from tumours into the bloodstream.
Galleri test results can provide clinicians with an accurate prediction of where the cancer is located in the body and, with the low rate of false positives are hopeful that it will work well alongside existing cancer screening in the UK. Several participants in the trial have already been urgently referred for further investigations.

If successful, the NHS in England plans to roll out the test to a further one million people across 2024 and 2025.

Co-Chief Investigator for the NHS-Galleri trial, Professor Charles Swanton, said: “This is a really big and important trial and it’s a huge achievement that we’ve now enrolled 140,000 trial volunteers. Whilst the first year of the trial may pick up cancers that have existed for some time, the second and third years provide the best opportunity to explore the expected benefits of picking up new cancers at an early stage when treatment is generally more successful. This will help us work out how the test might be used alongside the existing NHS cancer screening programme.”

Sir Harpal Kumar, President of GRAIL Europe said: “We are so grateful for the public’s enthusiasm for this trial and to all those who have volunteered and are looking forward to participants coming back to our mobile clinics from September.

“Previous research has shown that the test is particularly strong at detecting deadly cancers and our hope is that it will help the NHS to reduce the number of cancers detected at a late stage.

“Galleri test results can provide clinicians with an accurate prediction of where the cancer is located in the body and, with the low rate of false positives we are hopeful that it will work well alongside existing cancer screening in the UK – the results of this trial will be key to our understanding.”

This is the latest announcement in the NHS’s drive to catch cancers at an earlier stage, and follows the successful rollout of targeted lung trucks across the country, with more than 30,000 people invited for checks every month in mobile vehicles, and hundreds of cancers diagnosed earlier.

The move also comes on the back of record numbers of people getting checked for cancer over the last year with over 2.6 million people referred between April 2021 and March 2022 and over 640,000 people starting treatment since March 2020.

While last month roaming liver, trucks started offering on the spot scans for people most at risk of getting liver cancer, with mobile scanners visiting GP practices, town centres, and foodbanks to encourage the uptake of quick, non-invasive scans.

Set to begin later this year, staff in high street pharmacies will also be funded to spot signs of cancer and will be able to send people directly for scans and other checks, as part of an initiative to catch tumours early when they are easier to treat.

The NHS-Galleri trial is being run by The Cancer Research UK and King’s College London Cancer Prevention Trials Unit in partnership with the NHS and healthcare company, GRAIL, which has developed the Galleri test.

It is operating with the support of eight NHS Cancer Alliances across England that span Cheshire and Merseyside, Greater Manchester, the North East and North Cumbria, West Midlands, East Midlands, East of England, Kent and Medway, and South East London.

Posted in News
← Tribute to Peter Rhys EvansLeading head and neck surgeon to appear in TV series →
Our website uses cookies to analyse traffic and personalise advertising. To find out how we use this information please read our Privacy PolicyCookie settingsACCEPT Reject
Manage your Cookies